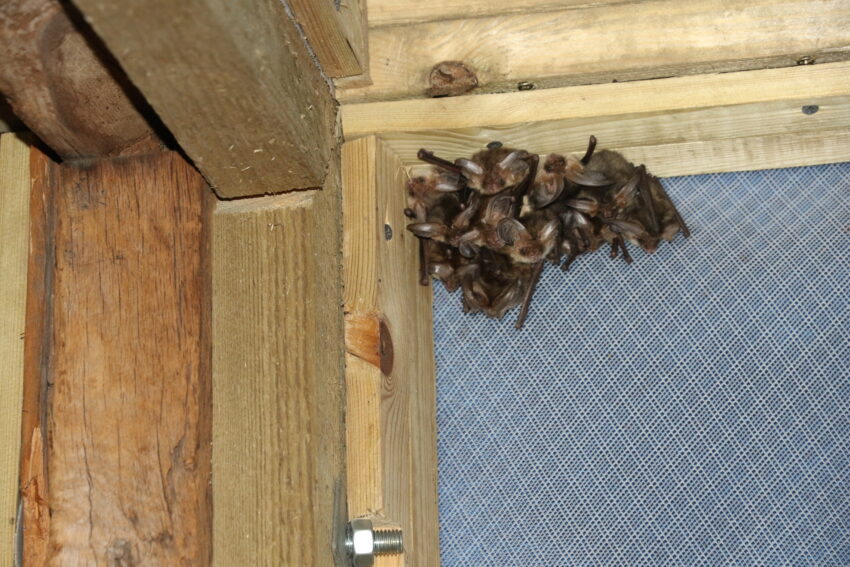 Project description
Non-Bitumen Coated Roofing Membranes pose a danger to bats, and there is a risk of encountering the material during building restoration works and roof repairs. This case study outlines a solution where NBCRM was identified post-installation in known bat roosts at the Mansion House at Greys Court and Bradenham Manor.

Brief site description
Two buildings owned by the National Trust all underwent roof repairs where Non-Bitumen Coated Roofing Membranes were installed: the estate office of the Mansion House at Greys Court, Oxfordshire, and Bradenham Manor, Buckinghamshire. The Mansion House is a three-storey building with a pitched roof composed of clay tiles. Originally built in the 1450’s, it was extended to its current footprint circa 1575 and has since undergone several renovations and redesigns until in the 20th century. It was re-roofed in 2007 with NBCRM; exposed sections of membrane were identified during a bat roost inspection by Bernwood Ecology in 2014. Bradenham Manor is a three-storey brick building with a slate and clay-tiled roof dating to the 1670s. The tiled roof has a timber frame, small dormer windows, and a row of brick chimneys along the top. It underwent minor ridgeline roof tile repairs and had fire doors installed in 2014, during which time the presence of NBCRM was identified under the sarking boarding and traditional bitumen felt.

Lighting present on site and its proximity to the roost
N/A. 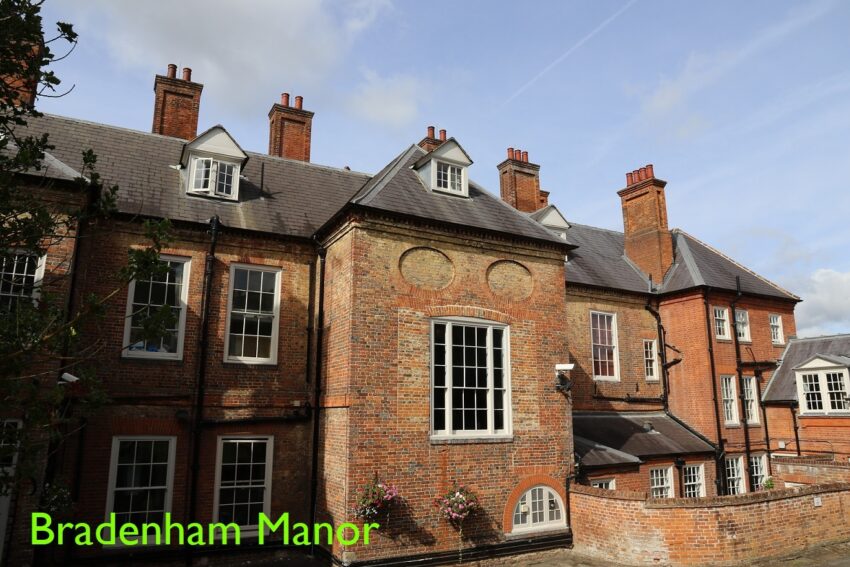 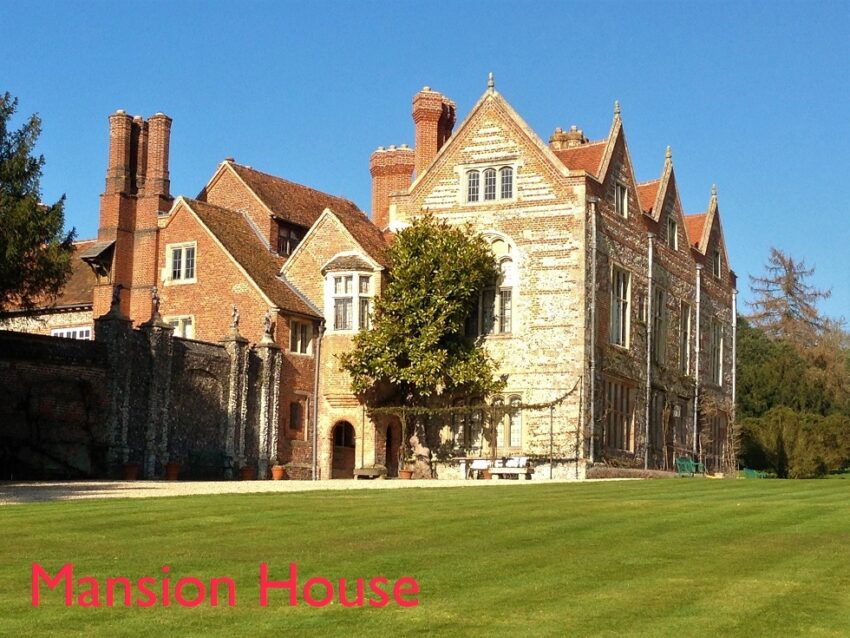 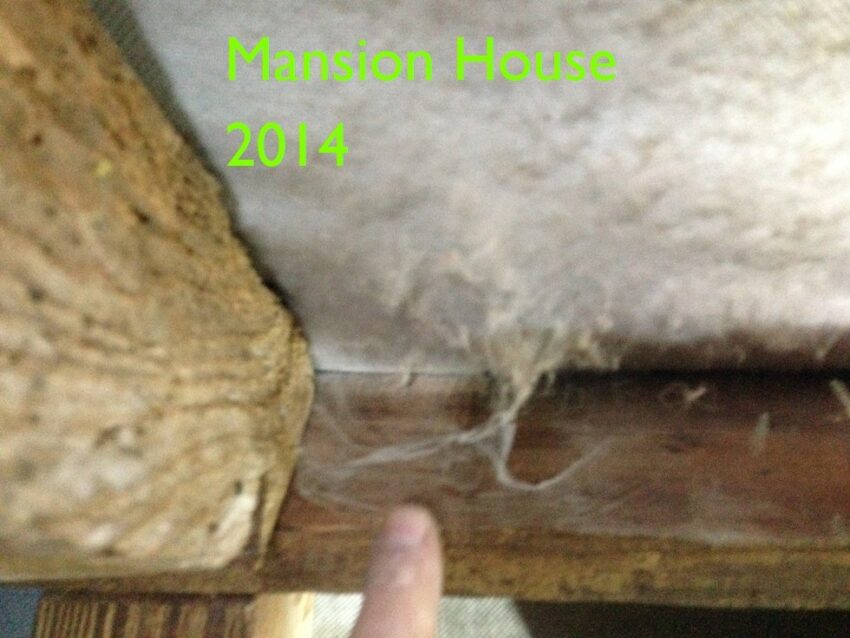 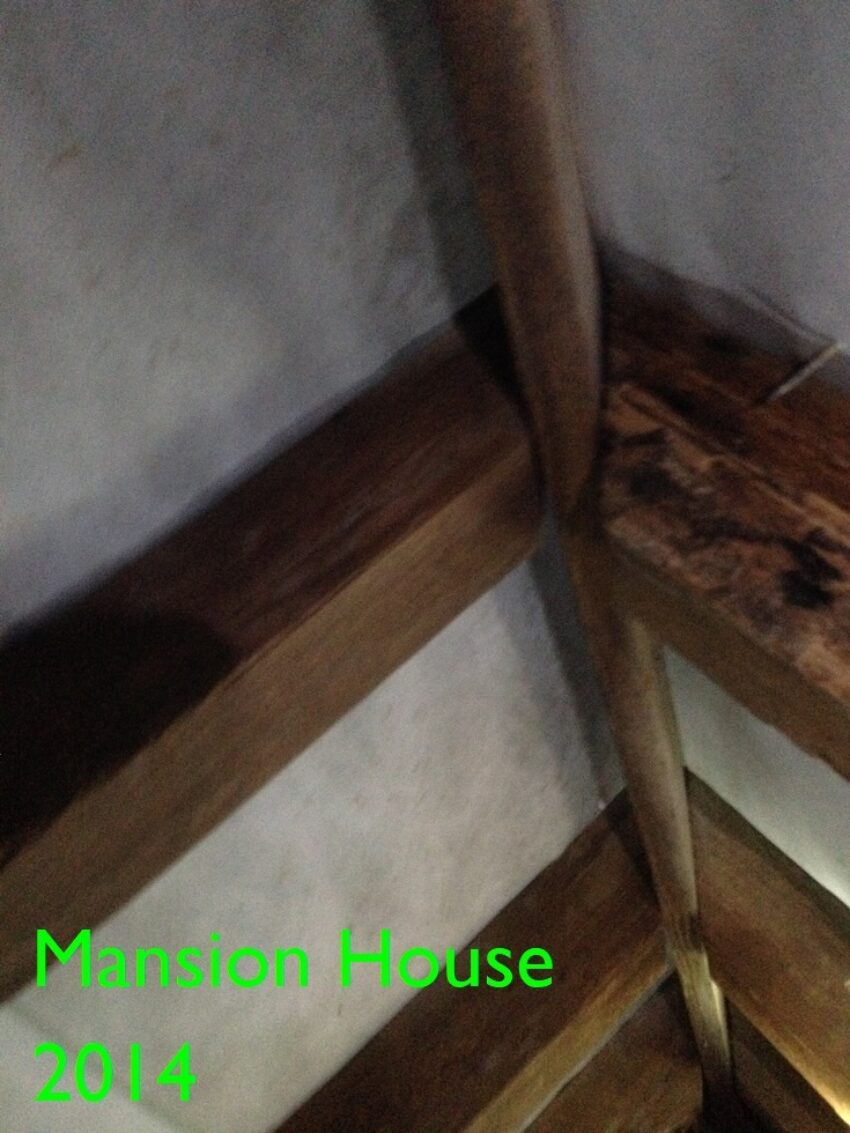 Description of works
The Mansion House at Greys Court had sections of exposed NBCRM identified during a roost inspection in April 2014, when the use of NBCRMs was becoming increasingly recognised as an entanglement hazard for bats due to their susceptibility to “fluffing.” The roost inspection found the presence of fresh bat droppings in this known roost (known since 2005), as well as staining where the exposed NBCRM had begun “fluffing.” The owner agreed to the quick response solution of covering the NBCRM with Netlon® mesh to reduce the risk of entangling prior to the maternity colony’s return during the 2014 bat breeding season. At Bradenham Manor in 2014, pre-work surveys for essential repairs to the roof ridgelines as well as the installation of fire doors in the loft void led to the discovery of exposed sections of NBCRMs. Previous surveys (2011 & 2014) indicated the presence of a brown long-eared bat maternity/ satellite roost, with occasional individuals recorded as present over the winter period. These sections of the site were also covered by Netlon® mesh to protect bats from entanglement.

Type of impact upon the roost
Disturbance 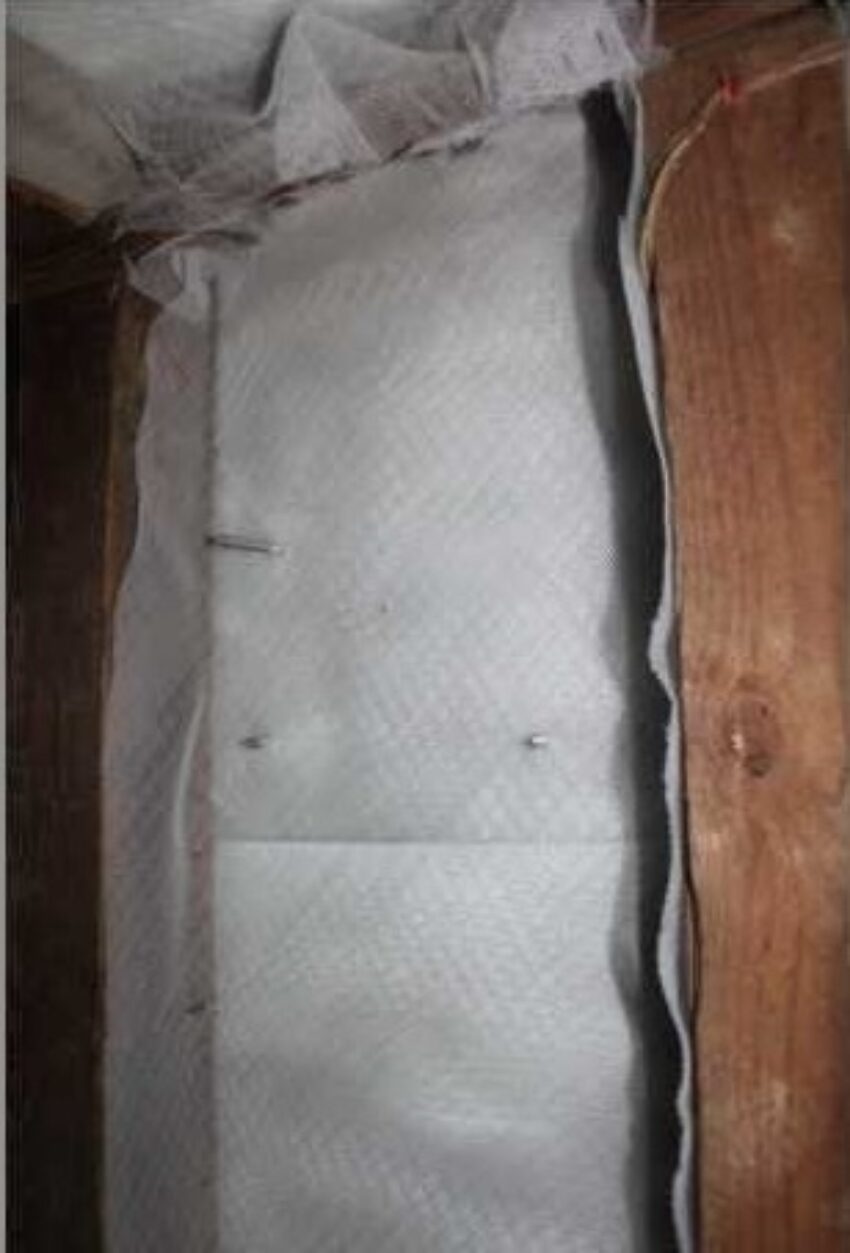 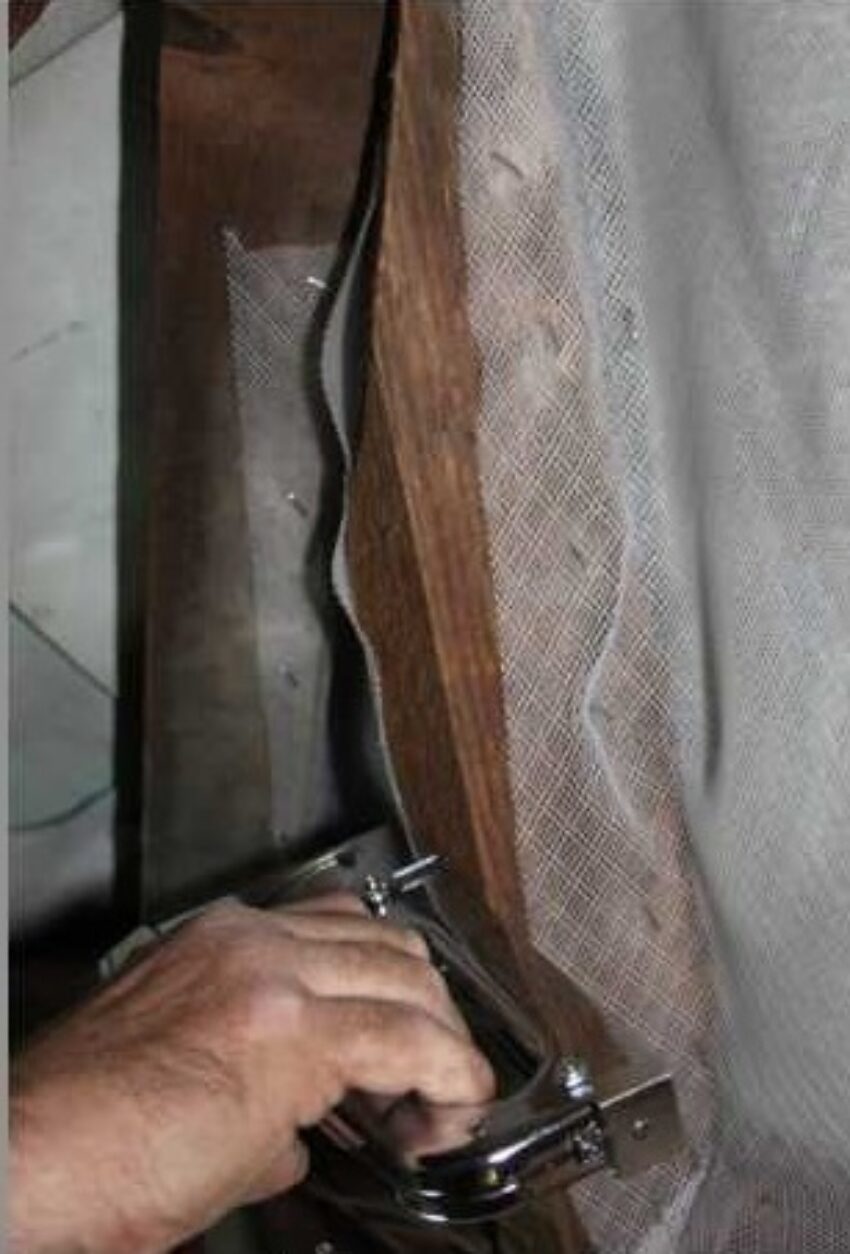 Specific technical detail of measure
At the Mansion House of Greys Court, Netlon® mesh type XN1455-8002 was stapled over all exposed areas of NBCRM inside the roof void. The mesh was attached to the wooden roof timbers, with staples were placed close to each other to prevent bats from accessing the space between the NBCRM and the mesh. This work took one week to accomplish, successfully completed before bat breeding season began. Long-term fixing of the mesh to battening was done post-maternity season. Bradenham Manor had the same mesh cover the internally exposed NBCRM, however it was fixed with battening instead of simply stapled. The difference in attachments between the sites was due to timing: Bradenham Manor works took place in October/ November, after the maternity period; while the Mansion House works took place in April, when a quick solution was critical before bat breeding season began. 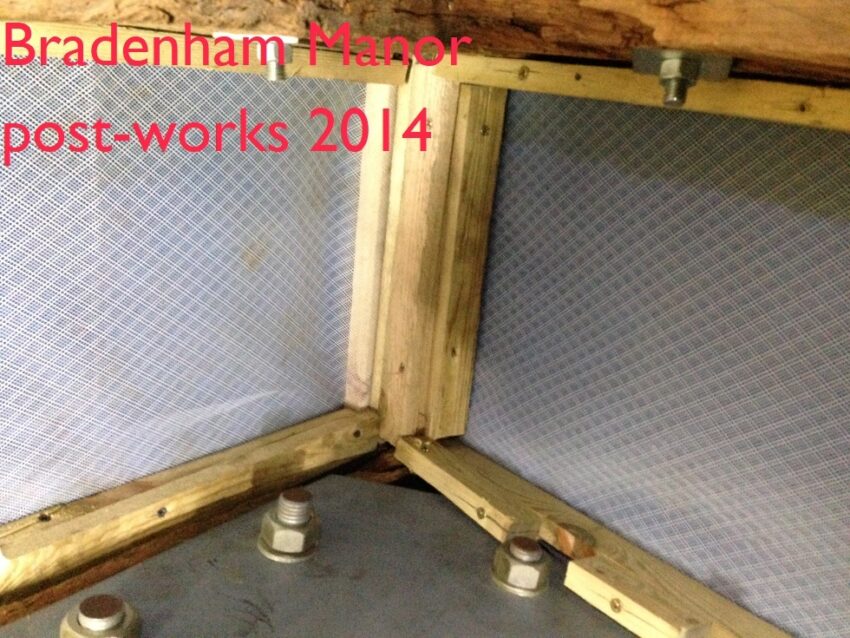 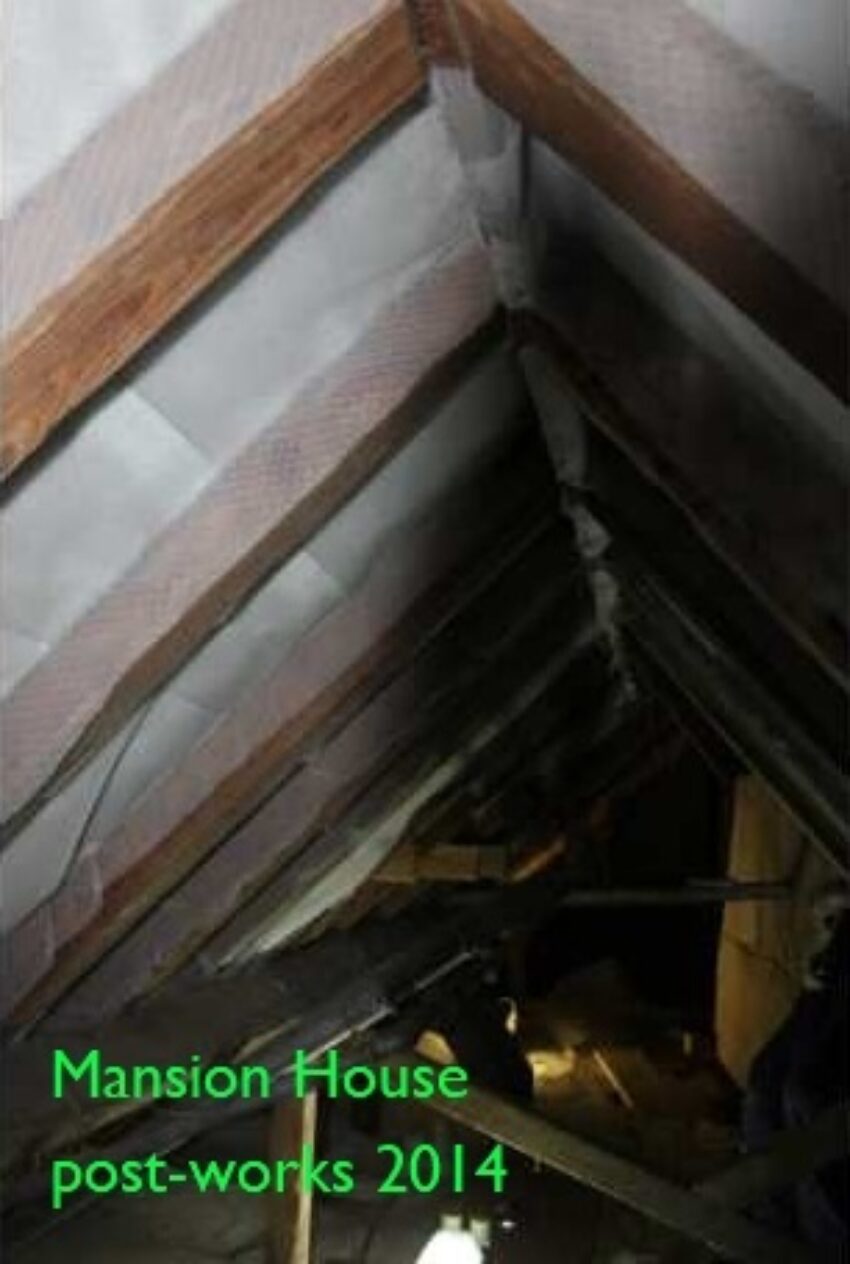 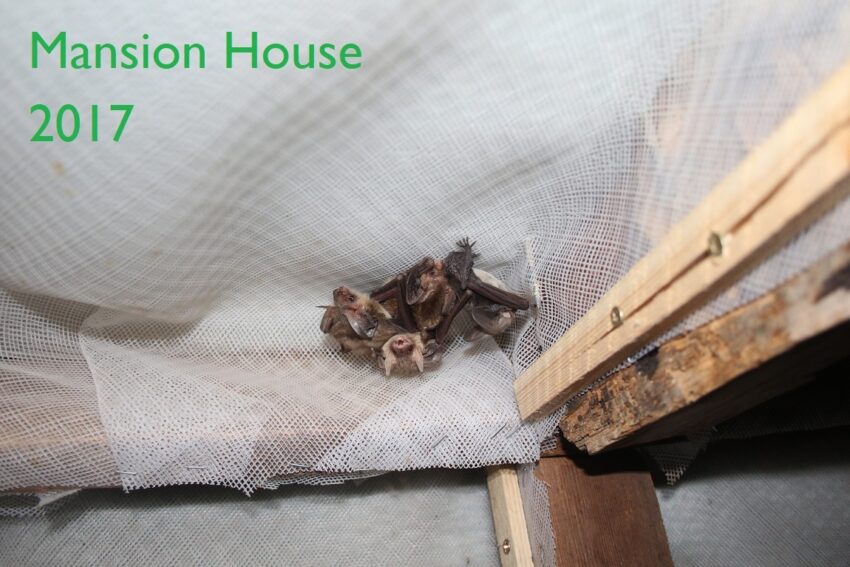 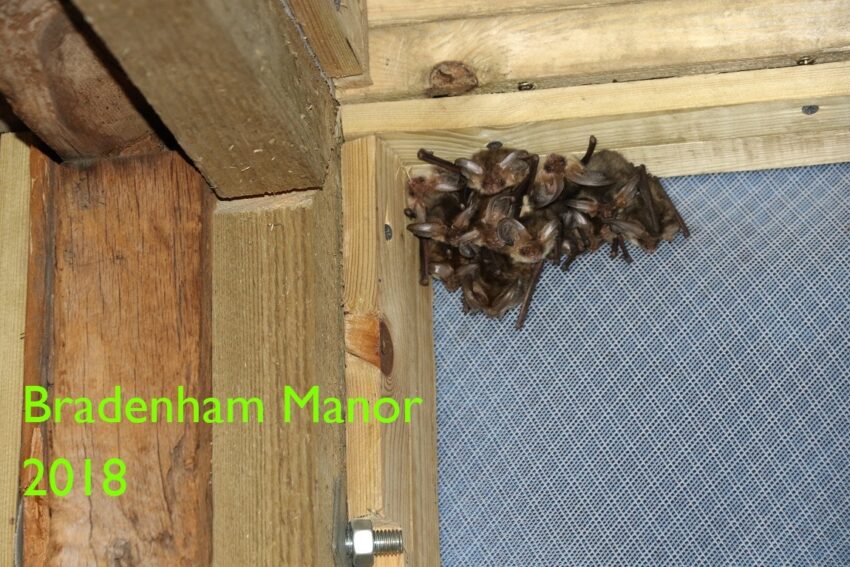 Frequency of monitoring
Annual monitoring proposed; however, access permission difficulties at Bradenham Manor only allowed for bat monitoring in 2017 and 2018.

Lessons learned
While their use is no longer advocated, NBCRMs continue to pose a death and injury risk to bats. Whilst this method of intervention demonstrates a valid response to protect a bat roost from incidental death and injury, potential concerns have been raised. Firstly, it is of paramount importance that the mesh be tightly secured, preferably fixed with battens. Where staples are used as a quick fix, they must be positioned close together to prevent bats from crawling between the mesh and NBCRM potentially trapping the bats. Secondly, this measure is meant to retrospectively provide a short- to long-term prevention of entanglement where NBCRMs are historically present and re-roofing is not an option due to expense or other issues. This intervention method should not be used to justify the use of NBCRMs as an alternative tile underlay. There has since been anecdotal evidence of NBCRM fibres coming through the mesh, possibly pulled through by bats at sites that have used this method. Thirdly, this method only provides protection from entanglement inside the roof void. This is particularly a concern for species that prefer to roost on the upper side of the membrane where entanglement/ deaths are unlikely to be recorded until the roof covering is removed. Fourthly, attaching mesh to the NBCRM is also likely to reduce its function, negatively impacting the intended benefits of using the material in the first place. The need to fully engage with the building industry, architects, suppliers, and contractors, together with government departments for sustainability and the natural environment is imperative when encountering NBCRMs in roof repairs and/ or building restorations. Bernwood Ecology would like to thank Collin Morris for his original idea, and Stacey Waring for her valuable work on the subject.

Back to case studies