The Bat Conservation Trust is proud to work with a variety of expert bat workers in delivering their training programme. The course tutors share their skills and knowledge, along with personal anecdotes from their years of experience, to create an engaging and supportive learning atmosphere.

Meet some of the tutors...

Philip joined the Bat Conservation Trust in 2003 and is currently Monitoring Manager with responsibility for the National Bat Monitoring Programme. He is a member of London Bat Group and Dorset Bat Group and also leads the Richmond Bat Species Action Plan steering group.

Richard has been a licensed batwork trainer and consultant since 1998. A former BCT Trustee and member of the Bat Survey Guidelines team, Richard specialises in training professionals and supporting ecologists; mainly on complex projects and usually involving rare bats.

Dr Kayleigh Fawcett Williams is a Bat Ecologist and Level 2 Thermographer at KFW Scientific and Creative. Kayleigh has used thermal imaging techniques for bat applications for the past nine years as part of commercial bat survey projects and academic projects as part of her PhD research. Kayleigh has conducted thermal imaging surveys on a variety of projects including: infrastructure, wind farms, restoration, residential and industrial developments.

Jo is the Built Environment Manager and has been with the Bat Conservation Trust since 2015. Prior to this she had worked in ecological consultancy and has extensive experience in the conservation and scientific research sectors, including working in Australia for 18 months using her bat survey skills to help run the micro-bats trapping and radio-tracking project in the botanic gardens with volunteers from Earthwatch. Jo is a full member of CIEEM and a member of the London Bat Group.

Louise is a Chartered Ecologist and Lantra trainer for BCT with 18 years’ experience in the public, private and voluntary sectors. Louise has experience of dealing with bats in a range of situations throughout the UK, holds a level two survey licence from Natural England, and is also a Volunteer Bat Roost Visitor and a member of a number of local bat groups. Louise was the Biodiversity Officer at BCT for two years and has provided expertise to the Chartered Institute of Ecology and Environmental Management. She has worked for several well respected consultancies and local authorities. She has an excellent grasp of the planning and legal framework behind all protected site and species work as well as hands-on survey and mitigation experience. As well as bats, Louise also has a love of botany. "Bats are amazing, you never stop learning!"

Colin was formerly the Bat Groups Officer for BCT . He has been involved with bat work since the early 1980s when he joined the Dorset Bat Group and trained for his first bat licence, having become intrigued by bats he came across in his work as a roofer. As a volunteer he helped Bob Stebbings excavate the ‘World’s first cave in solid rock for hibernating bats’ (1989). Towards the end of 1991 Colin joined the VWT and undertook a variety of projects, from ‘Developing a method to determine the population of small mustelids in the UK’, initiating a programme of bat box schemes to enable the study the rarer woodland bats (barbastelle and Bechstein’s) and undertook several radio-tracking projects on both species of horseshoe bats and two projects on Bechstein’s bats, but his main role was managing the trust’s portfolio of nature reserves. In 2014 he was thrilled to be awarded the Pete Guest Award for his contribution to bat conservation in the UK.

Abby is the bat groups officer at BCT, supporting bat groups and organising events. She started working with bats in 2018 and is still a surveyor along with her BCT role. Abby also has a background studying conservation techniques and management of threatened island species.

Sonia first became interested in bats in 2011, when she took part in a radio tracking session at the National Trust Blickling Estate, with the Norfolk Barbastelle Study Group (NBSG). Since then she has become a NBSG trustee, assisting the group with various surveys and gained her MSc in Applied Ecology and Conservation from the University of East Anglia. She joined BCT in March 2016 as the Volunteer Coordinator for the Swanton Novers project and is now BCT's Woodland Officer.

Steve has been an active bat worker for 19 years having joined the Derbyshire Bat Conservation Group when he was twelve years old. He enjoyed the bat work so much that he decided to make his passion his career and is now a Chartered Ecologist. Steve learnt to use ArcGIS software in 2009 whilst undertaking a Master’s degree. Now specialising in bat ecology, Steve has been using QGIS software in a professional capacity since 2014 as an ecological consultant and in his spare time has been using his acquired skills to map Derbyshire Bat Group’s dataset to help them understand more about their knowledge of Derbyshire’s bats and what more there is to learn based on the mapping of their existing records.

Natalie has been involved in bat conservation for nearly 20 years working both with her local bat group and on various projects, including the first radio-tracking of Nathusius' pipistrelles in Scotland. She gained her trainers licence in 2005 and since then has regularly mentored trainees. As part of her work as a ranger, Natalie specialised in bats and historic buildings, interprepation and public engagement, and delivering training in surveying and species identification. Over the years she has delivered many training courses on different aspects of bat ecology and surveying, including working on behalf of the Bat Conservation Trust, Historic Scotland, and Echoes Ecology. Natalie is currently Chair of Lothians Bat Group and jointly runs Tragus Training.

Dean is a lecturer in Ecology at the University of York and has been working with bats for some 25 years. He is particularly interested in the information we can extract from bat detectors and how best to survey for something we hardly ever see.

Lisa is Head of Conservation Services for the Bat Conservation Trust where a major part of her role is to support bat groups and share information between BCT and bat groups, as well working on joint projects with Partner Groups. Having previously worked in ecological consultancy, she joined the Bat Conservation in 2011 and enjoys giving talks and running training workshops.

Any questions? Email the Training team
Next: Frequently Asked Questions 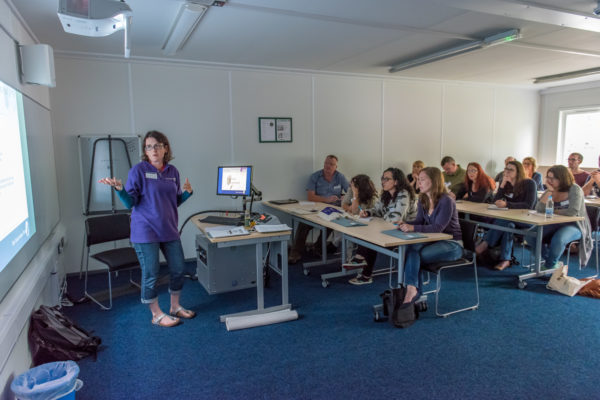